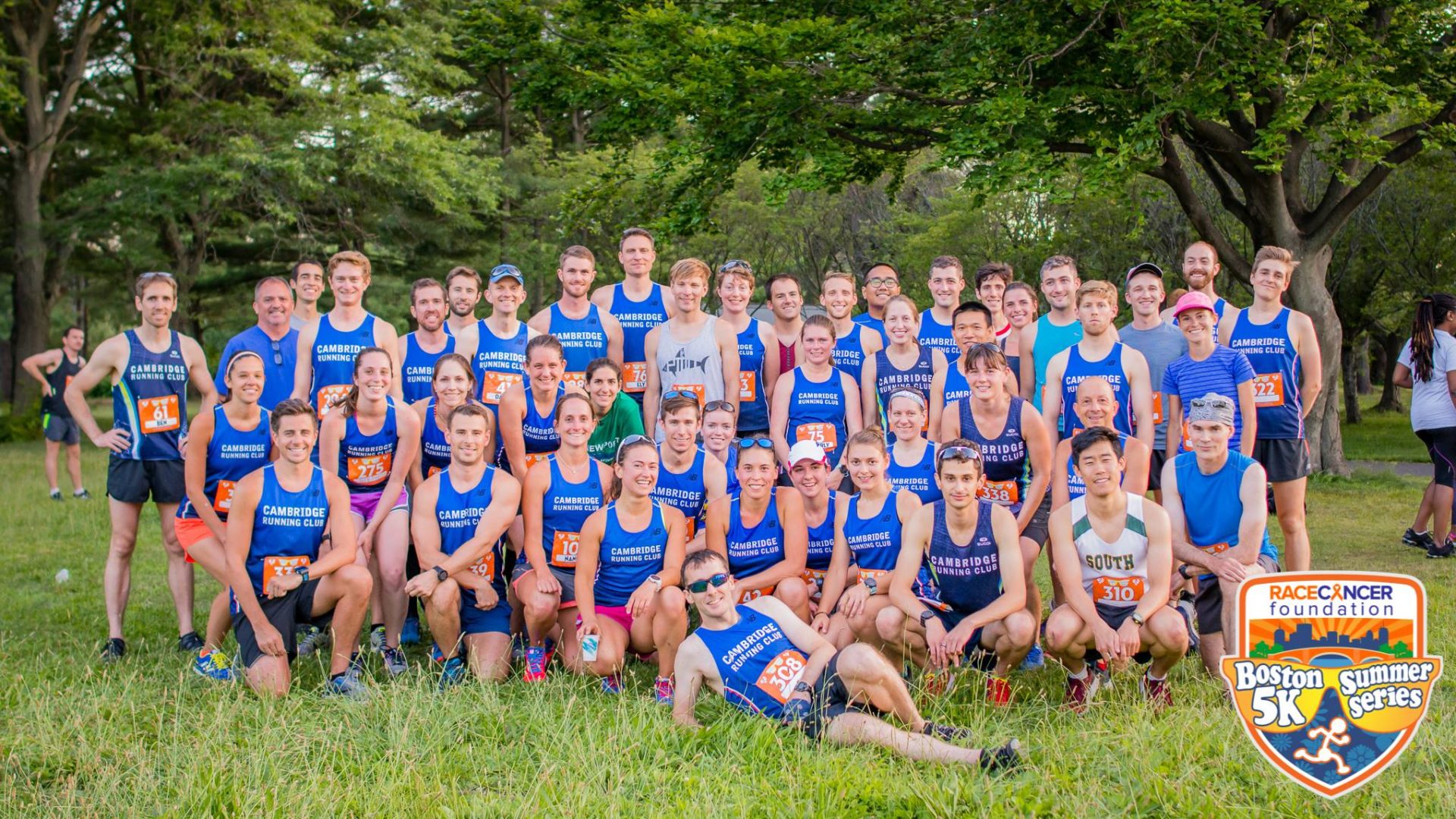 In 1983, the Cambridge Running Club (CRC) was created when five Fitcorp Health club members realized that they were all running in downtown Boston at similar times of day, and decided to form a running club.

They went to the Bill Rodgers Running Center seeking advice, and Bill Rodgers’ brother, Charlie, suggested that they call Fred Treseler.
The Boston Athletic Association (BAA), one of the nation’s oldest running clubs, had recently hired Fred to help revitalize the BAA.

A short time later in the basement of a building on State Street in downtown Boston, the “founding five,” Fred Epstein, John McKenna, Lois McCallum, Ginny Carlin and Keith Kennedy met with Fred Treseler to discuss the idea. Fred decided to help the club get started and also agreed to be their coach. The club began as the Fitcorp Striders.

One of the founding five, Lois McCallum, a licensed aircraft pilot, was the first woman to pilot a human powered aircraft in connection with the world famous Daedulus Project. Her training and preparation to power the aircraft was guided by her training with Fred Treseler as part of the Fitcorp Striders.

During the 80’s, the club began “Wednesday Night Workouts at MIT” and these workouts would become the signature workout of the club year-round, indoors or outdoors, for over two decades. A few years later, Fitcorp amicably ended its running club sponsorship and the running club found a new sponsor across the river, the Cambridge Racquet and Fitness Club. As the workouts at MIT continued, club membership grew significantly. A few years later, the CRFC ended its sponsorship, and the club took on the name that we all now recognize, the Cambridge Running Club.

During the 80’s Coach Treseler developed his Boston Marathon Training Program for CRC members, who have always varied widely in experience and abilities. The training program helped CRC members to achieve outstanding results in the marathon for over two decades. Fred carefully tracked the runners using his program over the years and he calculates that our members achieved a 98% completion rate for all marathons entered.

Fred maintained his connection with CRC over the years even while his other coaching experiences took him abroad to World Championships and Olympic Games. Through those experiences, CRC was exposed to elite athletes training at the highest levels of the sport.

From the mid 1980s to the present day, CRC has grown from being a small, very informal running club centered on a weekly MIT workout of just five or six people to a club of approximately 200 members that must monitor membership size to preserve the familiarity and camaraderie of the club. Like most grass roots organizations, the club saw its membership and financial status ebb and flow over the years. Fred stood by the club even during periods when he was uncompensated, and other members at various times have made financial contributions to underwrite the club to sustain its existence.

As the club approached its twenty-fifth anniversary, the club adopted formal by-laws and was run by an elected group of volunteer officers. In addition to the volunteer officers, many other members supported the club informally by organizing runs, trips to races, and other volunteer efforts. The club developed a weekend run hosted by a club member at his or her house and a fun conversational run on Tuesdays Ð all the while maintaining its 20 plus year history of track workouts at MIT. It also has enjoyed a positive relationship with Harvard University and has used its track and stadium stairs for workouts there as well. Evidencing the strong sense of community within the club, CRC has also traveled in groups of thirty or more to Philadelphia, Chicago, and throughout New England to participate in marathons, half-marathons, and relay races.